President Muhammadu Buhari has told those agitating for the state of Biafra in the country’s South East to jettison the idea.

The president was referring to two separatist groups, the Independent People of Biafra (IPOB) and the Movement for the Actualisation of the Sovereign State of Biafra (MASSOB). 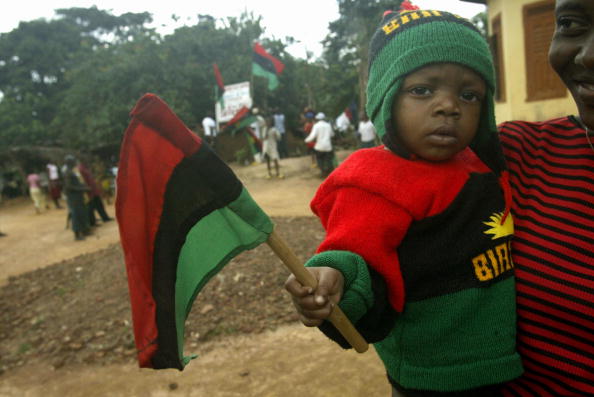 Buhari who received over 100 members of the National Youth Service Corps (NYSC), serving in his hometown, Daura, Katsina State, where he celebrated the Eid-el-Kabir, advised them to remain focused, pursue their dreams and reject those fanning embers of discord and disintegration of Nigeria.

Speaking specifically to corps members from the South East, he said: “Tell your colleagues who want Biafra to forget about it.

“As a military commander, I walked from Degem, a border town between the north and the east, to the border between Cameroon and Nigeria. I walked on foot for most of the 30 months that we fought the Nigeria/Biafra civil war, in which at least two million Nigerians were killed.”

“We were made by our leaders to go and fight Biafra not because of money or oil – because oil was not a critical factor then – but because of one Nigeria.

“So if leaderships at various levels failed, it was not the fault of the rest of Nigerians who have no quarrel with one another. So please, tell your colleagues that we must be together to build this country. It is big enough for us and potentially big enough in terms of resources.

‘’Those who work hard will earn a respectable living. I have seen this country, I fought for this country and I will continue to work for the unity of this country,’’ the president added.

The president also called on Nigerian youths to make Nigeria great again through the pursuit of knowledge, patriotism and commitment to values that promote national unity.

He pledged his unalloyed commitment to the unity and prosperity of Nigeria.

According to a statement by his senior special assistant, Media, Garba Shehu, Buhari, who specially recognised corps members from the Niger Delta and South East states serving in Daura, praised the vision of former President Yakubu Gowon in setting up the scheme in 1973.

He said the scheme had creditably promoted national unity and cohesion by exposing young people to the uniqueness and cultural diversity of Nigeria.

“I asked for those from the other extreme of Nigeria because I very much appreciate the NYSC scheme and whenever I see General Gowon, I always thank him for that,’’ the president said.

The corps liaison officer in Daura, Mr Egbewumi Adebolu, in his remarks, said the youths strongly believe in the current administration’s programmes to reduce unemployment and create jobs for more Nigerians.

Police Public Relations Officer (PPRO) in the state, Mrs Nkeiruka Nwode, an assistant superintendent of police (ASP), made the disclosure in an interview with newsmen in Onitsha, yesterday.

Nwode said the arrests were carried out in different parts of the town during a procession by the group to mark 17 years of its existence.

She explained that the persons were arrested for illegal possession of weapons, adding that no life was lost in the confusion that followed the arrest of the members.

However, the religious administrator of MASSOB, Rev. Apostle Ezichukwu, claimed that more than 50 members were arrested, with 20 missing and one person allegedly shot by the police.

Ezichukwu noted that the procession was peaceful, and wondered why the police arrested members of the group.

He alleged that security personnel from the Army, Police, Navy and NSCDC were detaining MASSOB members at the Army barracks, Onitsha, police headquarters, Awka and other police stations.

Also speaking, the Anambra North Zonal Leader of MASSOB, Mr Benjamin Omenka, appealed for the release of those arrested and urged members of the group to be patient.

According to him, the present call for restructuring by some segments of the country came as a result of the fear of Biafra independence by those who have tied the country down.

“Let the whole world know that we are resolute in our stand for a Biafra Republic. It is not compulsory that we shall remain one indivisible nation, so they should allow us to go to our Promised Land,” he said, adding that the agitation would remain a peaceful one.