Signs that this Saturday’s governorship poll in Edo State may not go down without incidents emerged yesterday, as the two major political parties, the ruling Peoples Democratic Party (PDP) and the opposition All Progressives Congress (APC) elevated their “art” of making unsubstantiated allegations against each other.

Specifically, they accused one another of plots to violate the sanctity of the polls, by making a peaceful and credible exercise impossible.

The Publicity Secretary of the party, Chris Osa Nehikhare, who spoke on behalf of the PDP Campaign Council, raised the alarm over alleged suspicious movement of persons from Lagos State and other parts of the country into the state.

Nehikhare said: “We have just been alerted that 10 hummer buses left Ojo Military Cantonment in Lagos, for Auchi, in Edo State this morning. This is one out of over 10 such calls that we have received in the last 48 hours. 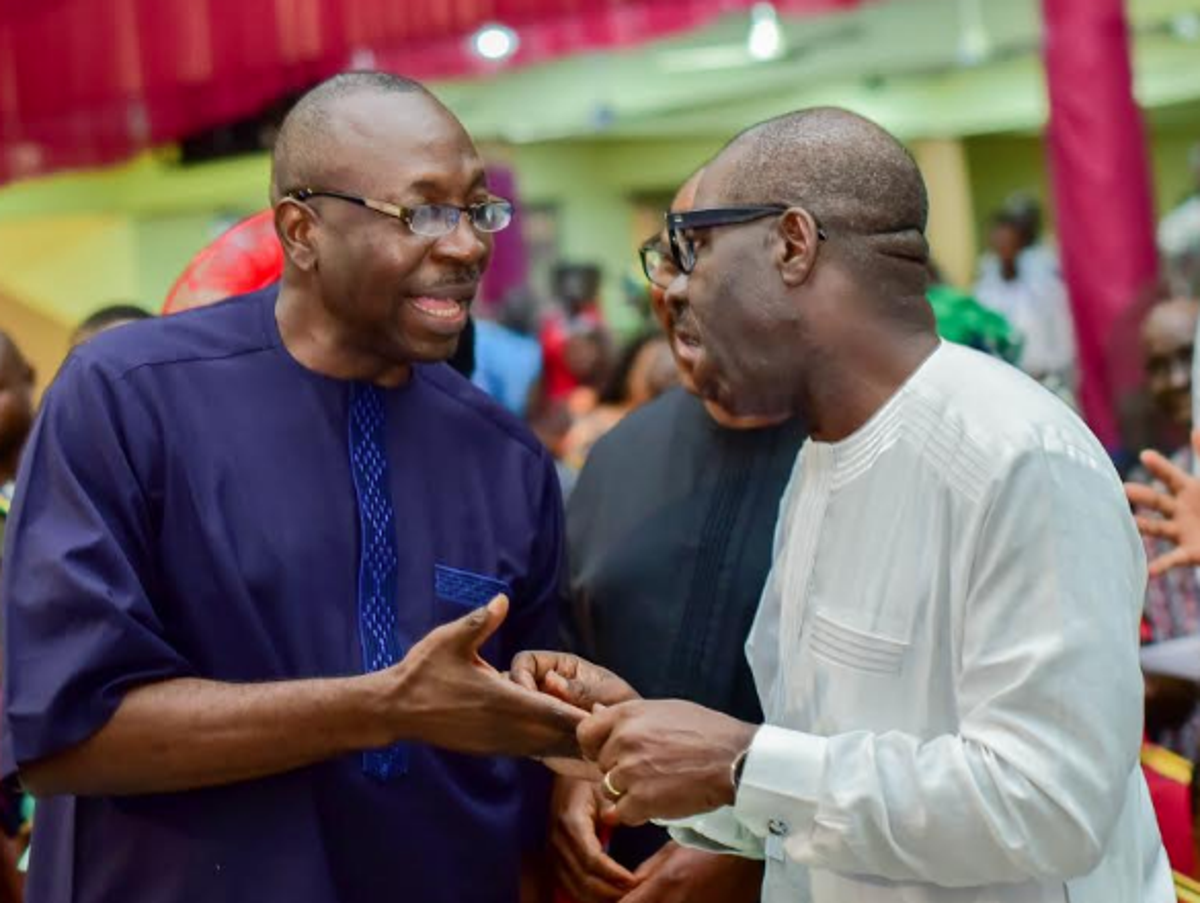 “We are liaising with the relevant security agencies to ascertain the mission(s) of these persons flocking into the state and we advise members of the public to watch out for persons whose presence and activities in their neighborhood, are suspicious and report same to the police and other law enforcement agencies.”

He urged security agencies in the country “to pay more than the usual attention to these movements in order to ensure that Edo voters are insulated from harm before, during and after the forthcoming gubernatorial election in the state.”

Shortly after the PDP raised the alarm, the APC also alleged that the state government disbursed monies to officials of the Independent National Electoral Commission (INEC) that have been mandated to carry out electoral duties across the 18 local councils of the state.

According to the chairman of APC Media Campaign Council, John Mayaki: “We received veritable details of over N100m contract for the alleged purchase of arms by the PDP for the supply and distribution to thugs.

“Local Government chairmen are being directed to give N1.7m to Electoral Officials (EOs) in the various local government areas. One of the council chairmen said he has ordered his council’s treasurer to effect the payment under the sub-head of ‘support for elections logistics.”

Mayaki, who said that the disbursement was done on Friday, did not present evidence of payment or electronic transfer, even as he said the development “confirms our earlier revelation that he (Governor Godwin Obaseki) has a N5b budget earmarked for election rigging and vote commerce.”

He further alleged that at least 25 pump action rifles had been budgeted for each local government area, and condemned the governing party’s desperation for re-election, expressing apprehensions of a bitter aftermath in the state. Meanwhile, as the D. Day draws near, the main issues dominating discussions in the state are who, between Governor Obaseki and his main challenger, Pastor Osagie Ize-Iyamu, would carry the day and what factors that would likely facilitate such electoral fortune.

In separate interviews with The Guardian, stalwarts of the PDP and APC, who incidentally are lawyers, argued that demographics, track record of achievement and party platforms would propel the standard bearers of the two political parties.

Against the general impression that the election is more of a referendum on the last four years of Obaseki’s tenure, the Co-convener of Edo Peoples Movement (EPM), Chief Henry Idahagbon, said Obaseki’s poor performance in office would hand him a crushing defeat at the poll.

But a former governorship aspirant on the PDP platform, Chief Ken Imasuagbon, who stepped down for Obaseki, expressed confidence that Obaseki would emerge victorious, stressing that Edo people stand to gain more from his re-election than experimenting with a new governor.

Obaseki and Ize-Iyamu share contrasting political grounds and experiences. Right from the inception of the current democratic experience, Ize-Iyamu has been involved in Edo politics, while Obaseki is relatively a recent introduction. Although both men served in the immediate past administration of Comrade Adams Oshiomhole, Ize-Iyamu was a prominent stakeholder in previous administration of Chief Lucky Igbinedion.

Not that alone, both men have crisscrossed various political parties, but, while Obaseki’s recent manoeuvre from the APC to PDP was circumstantially enforced, Ize-Iyamu’s circuit around PDP, Action Congress of Nigeria (ACN), the PDP and back to the APC was informed by the search for opportunity to serve.

Incidentally, both Ize-Iyamu and Obaseki hail from the same Edo South Senatorial District and are supported by running mates from Edo North and two strong political parties.

Against those interesting backgrounds, what are the likely factors to sway voter preferences in favour of either candidate? Chief Imasuagbon, insists that “the scenario favours Governor Godwin Obaseki and his deputy, Phillip Shaibu.”

The PDP chieftain, who further explained how things would pan out in the senatorial districts, stressed that although Ize-Iyamu’s closeness with Oshiomhole could attract sympathy votes to APC from Edo North, the presence of Comrade Phillip Shaibu on a joint gubernatorial ticket with Obaseki would tilt the balance in Obaseki’s favour.

Imasuagbon remarked that while Obaseki and Ize-Iyamu would divide the 1.2 million votes available in Edo South where they hail, and more voters are inclined to repeat their preference for PDP, adding that the force of Obaseki’s incumbency would pull greater number of votes to his side.

He argued that based on the understanding Obaseki reached with Esan leaders, the bulk of votes from Edo Central would go to him and the PDP, adding that Esan agenda, which presupposes that power should rotate to Edo Central wheels popular support for Obaseki, since according to him, the incumbent can only serve an additional four years and nothing more.

“This election will be one way, this time around no Esan man or woman will vote for APC. Moreover, there is no person from Edo South that will not vote for Obaseki and PDP more than APC. They cannot afford the failure of APC again. There’s no how an Edolite will contemplate voting for APC, that is the gospel truth,” he declared.

Imasuagbon added that having fought against godfathers and stopping them from turning the state to their personal estate, Obaseki stands a greater chance to serve the people without the suffocating influence of such characters.

But, dismissing Imasuagbon’s observations, Chief Idahagbon said Obaseki does not have any godfather and could not have fought any, stressing that the governor merely hung on a cliché knowing that it is a catchphrase so dear to Edo people and decided to run with it.

Idahagbon pointed out that unlike Oshiomhole, who experienced the suffocating influence of a powerful godfather, Obaseki did not face any such serious challenge to the execution of his mandate. He challenged the governor to tell Edo people whether Oshiomhole ever solicited or got contracts from his administration, or even insisted on sighting the state’s budget before taking it to the House of Assembly.

Idahagbon, who is a former Attorney General and Commissioner for Justice in the state maintained that Obaseki failed to rally round critical stakeholders that worked for his emergence as governor in 2016, thereby opening his administration for failure.

The APC chieftain declared that reports and feelers from across the length and breadth of the state show that defeat awaits Obaseki this Saturday, adding that the investiture of a traditional chieftaincy title of ‘Itsemakhoma’ on Pastor Ize-Iyamu confirms that Edo North Senatorial District has been taken by APC.

“Coming from the first class traditional ruler at this point in time and within days to the governorship election, what else do you want? Remember that Oshiomhole is not only from that area, but he is still well respected. As far as I am concerned, Edo North would deliver bloc vote for Ize-Iyamu and APC,” he stated.

On how the vote tally would pan out after the ballot on Saturday, Idahagbon said: “Let me tell you, it is true that we have 1.2 million voters and seven local government councils in Edo South. In Umhunwode, Orhionwon, Ovia Southwest and Ovia Southeast, even before the first ballot, Obaseki has already lost.

“The governor did not do even a single project in any of those local government areas. He claims to come from Orhionwon, when it is convenient for him, because one Obaseki, his uncle, established business there long time ago.”