Your Holiness, Bishop Matthew Hassan Kukah, I can only paraphrase what the late great Ikemba Odumegwu Ojukwu told the late Ogoni activist, Kenule Saro-Wiwa, when Ken came to the Igbo Summit in Enugu in 1995, and like the insensitive imbecile he was, arrogantly asked the Igbo to join the Ogoni struggle for the emancipation of the Niger Delta. Ojukwu, always ready for this kind of stupidity, retorted; “ Good morning My dear Brother Ken, its never too late to wake up to reality”. Yes, Good morning at 5pm, Enugu time, and that says it all. 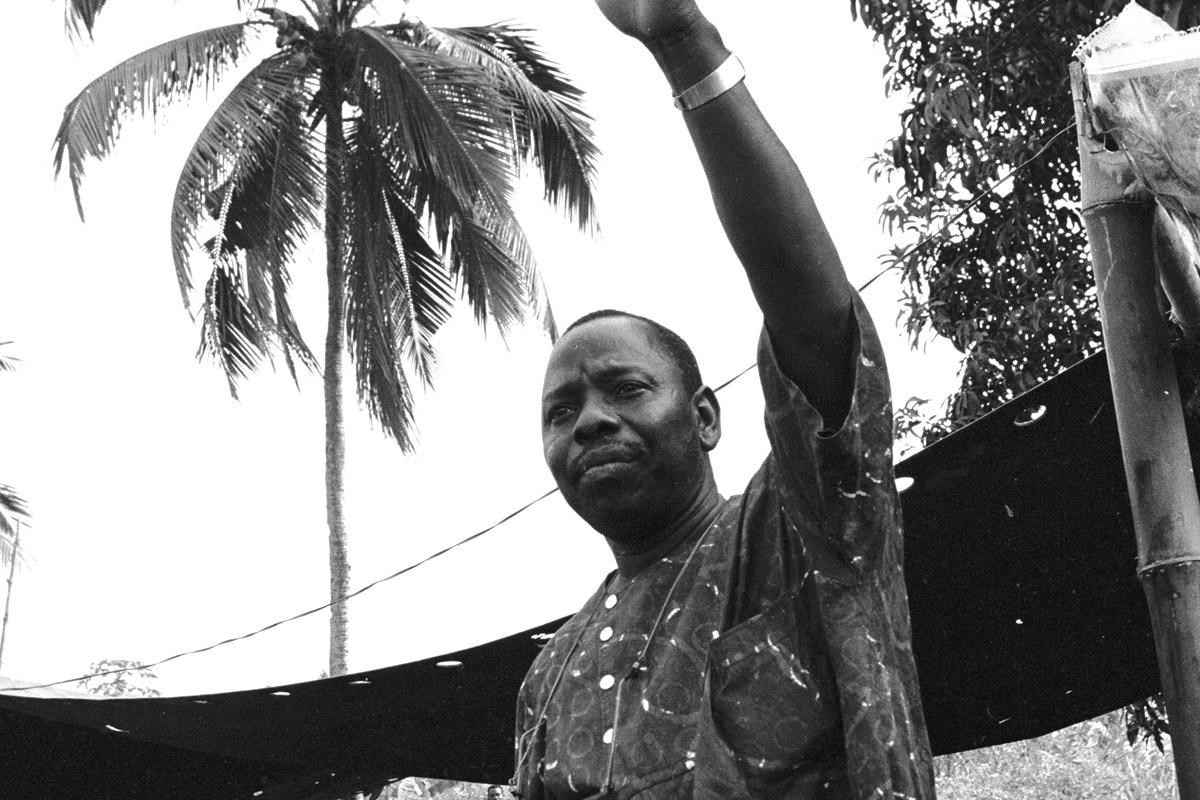 This then ties in to the retort to the late unmourned General Hassan Usman Katsina by a senior Middle Belt officer, who happens to be General Domkat Bali (we know these things) that if the Civil war were to be fought at that auspicious day in the late 1980s, he would be on the side of Biafra. I was once on a BA flight with Domkat Bali, so things happen, as my favourite columnist, Jimanze Ego-Alowes of the Sun Newspapers’s Turf Game would say.

Now back to the Catholic Bishop of Sokoto, Mathew Hassan Kukah, southern Kaduna native and recent convert to the Nigerian reality. From the bottom of my heart and I believe that I speak for most Igbo people, sans the politicians, I welcome you to the reality of the Lugardian contraption , that is in reality a madhouse human Zoo. Good Morning your Holiness and thank you for calling out the Nigerian society and rebuking the crawling and genuflecting military apologist and Ibrahim Babangida side-kick and biographer, the sickeningly servile “intellectual” pen-for-hire, Dr Chidi Amuta.

In my ThisDay article of June 6, 2017, titled “We are All Biafrans Now”, long before Chido Onuma coined his hashtag, I was of the same opinion as you have now asserted. Bottom line, Biafra is not a threat to Nigeria, because We are All Biafrans Now. Nobody wants to have anything to do with Nigeria as is, and I am almost sure that this includes the current buccaneers, carpetbaggers and simple thieves, now sparring at the Villa. How do you want to live in a country where in peacetime, the President and C-in-C dares not go to his hometown , for fear of being kidnapped or harmed, even with a brigade of soldiers stationed there to protect him? The Government also paid ransom to terrorists to secure the release of his Traditional Ruler after he was kidnapped. Infra Dig!! Even a Banana Republic would do better than this.

Therefore instead of the Biafran agitators being looked on as a threat to the existence of this Nigeria, they should be welcomed with open arms and a lot of national and ethnic genuflecting, as the harbingers of a Nigerian and African/Black Renaissance, the prophets of the Biafra of The Mind, Odumegwu Ojukwu’s parting gift to the country that refused to hear his John the Baptist exhortations; the voice in the Wilderness of the restructuring that would have saved Nigeria, now perhaps rather too late in the day. On Aburi he stood till the last day of his life,and for us his intellectual disciples, On Aburi we still stand, failing which disintegration and To Your Tents O Idiots!!

Again, Your Holiness, I must thank you for calling out Chidi Amuta, who wants the Igbos to get the Nigerian Presidencry in a “She Stoops To Conquer” attitude and philosophy, while staring the reality that all had gotten their portion by violence or threats of violence, especially the incumbent who would really spit at any Igbo politician soliciting his help in getting elected to the Presidency, instead of wielding a dagger aimed at his throat. But Chidi, the incurable crawler and genuflecting slave, would really not discern this reality.

The Igbo don’t need the Presidency, but must have it in 2023, if Nigeria wants to exist as a country, because it is their moral imperative to have it. Enough is enough and we may yet opt for the chips to fall where they may. For the youth all over Nigeria now, All Die na Die, especially the IPOB diehards. Nigeria may be surprised that nothing will assuage Igbo angst, not even the Presidency.

The only feeble opposition to an Igbo Presidency in 2023 will be a narrow genus of the Fulbe political class, who Bishop Kukah has quite cleverly excised from Nigeria in this article , a la the late Tiv Major Gideon Okar, who would have fought on the side of Biafra, if Civil war had broken out in the late 1980s. He was a Biafran, with the late General Mamman Vatsa as they marched to their death after that failed Coup. How times change.

Before I go, dear Bishop Matthew Hassan Kukah, I want to remind you that it was your peoples of the Middle Belt, supported by clergy like yourself, who led first , the pogroms of 1966-67 against the Igbo and then provided the bulk of the genocidal soldiers that ravaged the Biafran civilian populations, before starvation forced their soldiers to surrender, in order to save them from extermination.

It was the Domkat Bali’s, Yakubu Gowons(whose father Pastor Yohana baptised me at the St. Andrews Church in Wusasa, Zaria, after I was delivered at the adjoining CMS Hospital; my father told me that the genocidaire Yakubu was actually present at my baptism, a very frightening idea for me ), Mamman Vatsas, Onojas, David Marks (of abandoned property notoriety), Jeremiah “Jerryboy” Useni, Yakubu(or is it now Theophilus) Danjumas, John Shaggayas, Martin Adamus,Jeff Chandlers(Who killed Nzeogwu), Zamani Lekwots that directed the pogrom and slaughter of Igbo civilians and their fellow soldiers because, according to them, Nzeogwu and his idealistic gang of would-be redeemers, killed their idol Ahmad Bello. Meanwhile in 1964, Ahmadu Bello had sent Ojukwu to wipe out the Tivs, during the Tiv riots, and Ojukwu saved the Tivs. Talk about a reversal of fortunes; sheer savage and unthinking ingratitude.

It was the Gwodogwodo sweeper soldiers of the genocidal Nigeria Army , all recruited from the Godogodo Local Government of Southern Kaduna, the current theatre of Fulani atrocities, that raped, looted and slaughtered their way through captured Biafran territories in 1967-70 and thereafter. Incredibly, Bishop Mathew Hassan Kukah, these genocidal vermin and their descendants, actually expect Igbo sympathy, as their former runners, the marauding Fulani, now turn on them. Ditto the Tiv, Idoma, Berom, Angas, Nupe, Egbira, Igala and the other genocidal vermin of the Middle Belt.

It was between Igumale and Oturkpo in Idomaland and a few kilometres from the Igbo town of Obollafor, that Idoma mobs(ethnic cousins of the Igbo), set upon a hapless Igbo man, Onwuamaegbu, decapitating him and putting his torso back on the train to Enugu,as a Gift to “Ajukwu” to the unbelieving consternation of Igbo refugees on the exodus train from Kano, who believed that Gboko, Oturpko and Makurdi were safe havens from the slaughter farther North.

90% of the Igbos who died in the 1966-67 pogrom in the North were killed by Middle Belt mobs, the peoples now under attack by Fulani mobs. Talk about Karma and Nemesis. Man of God, search the scriptures and preach to your people. If there is an Igbo Presidency in 2023, it will be led by the Middle Belters, who owe the Igbo a depth of apology and 100% votes for an Igbo candidate. Anything else will not do, not even 99% of their vote.

In conclusion, I thank you very much, your Holiness for this indirect Mea Culpa and your courage in calling out the usual suspects. As for the Yoruba, the Afenifere genus are ready to play ball, it appears. The Muslim elements, perpetual slaves of the Fulani and the Egba elite, perpetual rent-seekers, are in morbid fear of a restructuring that will deny them the fruits of their advantageous location in Nigeria, and will therefore ally with the Fulbe political elite in order to disadvantage the Igbo, only to again be humiliated for the umpteenth time in history since 1804.

Your Holiness, Bishop Matthew Hassan Kukah,as we say in these parts, I bow and tremble before your honest exposition.

As a mark of respect to you, I will not use my usual apothem on Nigeria.