The 40-year-old lifted 200kg in the men’s -54kg weight class in the Powerlifting event hours after Latifat Tijani won the country’s first medal at the Games – a silver in the women’s -45kg weight category of the same event.

The 2014 Commonwealth Games silver medallist was largely unchallenged in the event as he led throughout his three attempts. Ezuruike broke the Paralympic record with his first lift of 185kg and never looked like he was going to lose his lead.

The Nigerian, who weighs 51.73kg, went further in his second lift as he extended the record by 5kg with a lift of 190kg. His final lift of 200kg drew a loud applause from the crowd as he entered the record books. 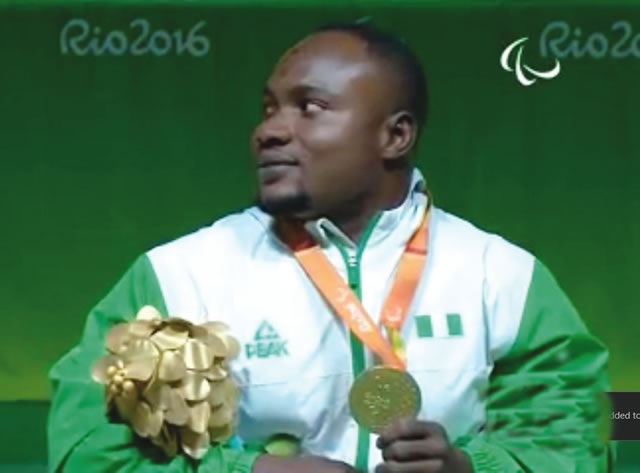 For Tijani, she could have clinched gold if not for the outstanding Chinese, Hu Dandan, who won gold.

It was a close call between the two as Tijani set the tone for breaking the Paralympic record with her first lift of 101kg before Dandan further broke the record with a lift of102kg.

Great Britain’s Zoe Newson, who won bronze, also gave Tijani some challenge with her lifts. She led at some point with a lift of 102kg but failed to lift further attempts at 105kg and 107kg.

Earlier on Thursday, Nigeria’s Ben Nsini finished last in the women’s -41kg Powerlifting event. The event was won by Turkish Muratli Nazmiye with a lift of 104kg, which is the new world and Paralympic record in the event.