The UK's 10 most wanted alleged fraudsters, two Nigerians among

The UK's 10 most wanted alleged fraudsters, two Nigerians among

Pictures of the UK's 10 most wanted alleged fraudsters have been released by police. 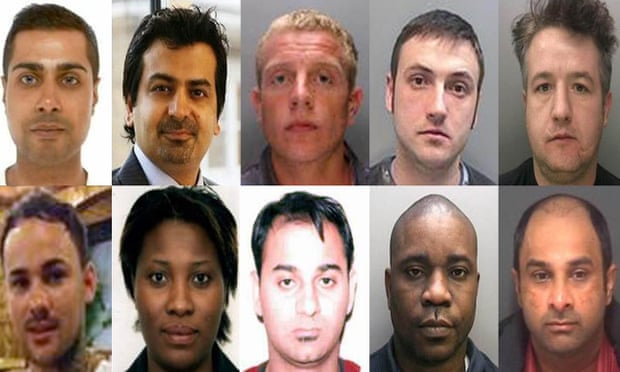 The City of London force and the National Crime Agency urged anyone with information about those on the list to get in touch.

Wanted by Scotland Yard, he is accused of taking out credit cards, bank accounts, and loans in the names of two former lovers and the parent of one of his partners, defrauding them of a total of £300,000.

McKenzie, who uses the aliases Jaswant Singh and James McKenzie, is also suspected of pocketing £30,000 while he was working for the accounts department of "a large multinational company", City of London Police said. His alleged crimes were committed between November 2014 and October 2015 and police believe he is now in the United States, where he has overstayed his visa.

Detective Constable Suzanne Raftery said: "It is clear that McKenzie has very little conscience and he has left his victims both emotionally and financially devastated. The fact he had the audacity to defraud his two partners who believed they were in a loving relationship with him, illustrates the disdain that he has for his victims and their feelings.

"People in the UK may have information on McKenzie's whereabouts and I would urge those people to come forward so that more lives aren't destroyed. McKenzie has met both of his partners on gay dating apps and it is feared that he may target further victims in this way."

Bogus Bollywood film producer Sandeep Arora, 42, is accused of claiming millions in VAT and Film Tax rebates for movies that either did not exist or with which he had no involvement. He is wanted by Her Majesty's Revenue and Customs over the evasion of more than £4.5m VAT and Film Tax.

Arora, from Beckton, east London, ran a production company with offices in central London between 2007 and 2011, and made VAT and Film Tax claims for movies called Billy the Beagle, London Dreams, Kuan Bola, Aagosh, Trapped and Kia the Dream Girl. He is known as Karan Arora in Bollywood circles, and is currently believed to be in India.

Levi John Coyle, 36, from Colchester, Essex, was convicted while on the run for a £700,000 so-called "boiler room" scam. The conman sold fake shares, stealing the six-figure sum from unsuspecting investors between 2009 and 2010.

He cold-called victims to sell shares apparently at knockdown prices, or shares that were not available for sale to the public. Coyle was jailed for six years in his absence for conspiracy to defraud, fraud by by false representation and money laundering.

Joseph Ford from City of London Police said: "We are calling upon the public for their assistance in locating Coyle. He must accept the consequences of his crimes, face the courts and begin the jail term handed to him in his absence."

Marius Lucian Anton, 31, is accused of using card skimming devices to steal and clone bank cards at supermarket cash machines. The Romanian, who has links to Northamptonshire and Corby, is wanted by Cheshire police for allegedly committing a string of fraud offences across the UK since 2012. He has not been found despite his photograph being circulated to all UK police forces.

Felix Rooney, 35, is accused of conning a pensioner out of nearly £100,000 by lying that his roof needed urgent repairs. The 72-year-old victim paid out the six-figure sum for the work on his home, which was later valued by Trading Standards to have a true cost of around £1,000.

Rooney, who is Irish and has scars on his face, has links to the West Midlands, Worcester and London and uses aliases including Michael Hannon and Martin Connors. Greater Manchester Police (GMP) believe he may have shaved his head and could still be committing crimes. He was jailed for six-and-a-half years in March 2011 after stealing money from elderly victims by getting into their homes claiming he was from the Water Board.

GMP advise anyone who sees Rooney not to approach him but to call police immediately. Anyone with information can call GMP on 0161 856 6860.

Adam James Stagg, 29, is believed to be enjoying a life of luxury in the Philippines "fully aware" he is wanted by Avon and Somerset Police for allegedly conning victims out of a total of £20,000 for luxury watches that were never delivered. Thought to be living in Manila, Stagg is accused of committing fraud between October 2013 and June 2014. It is alleged that he set up a string of companies trading from the Philippines offering customers in the UK deals on watches costing upwards of £100.

None of his 140 alleged victims received a watch and some claimed they were threatened when they tried to find out why.

Self-styled "professor" Alexia Thomas, 43, is wanted for selling fake immigration documents that cost around £300 each, but were issued by organisations that did not exist. The Nigerian is accused of helping set up companies that sold the documents, apparently provided by organisations such as "The Independent Diplomatic Commission" or "Commonwealth Liberation Party", that were later presented at court by unsuspecting victims applying for British citizenship.

Thomas used a string of aliases including Elizabeth or Lizzy with the surnames Henz; Ikuwe-Henz; Iheyen; Ikue-Henz; Ihenyue; Ikwue; Herz and Ihenyen, as well as the names Professor Thomas, Professor Summers, Martha Peterson and Alexia Bridget. She described herself as "Her Knowledgeable" on company literature.

The suspected fraudster's last known address was in Camden, north London, but she has lived in various different parts of the capital.

Faisal Butt, 39, from Lahore, Pakistan, has been convicted in his absence of stealing hundreds of thousands of pounds from more than 100 bank accounts. He was part of a criminal gang, that also included an insider at the bank, who opened joint bank accounts linked to existing customer accounts.

They were then able to transfer their victims' money into the joint accounts, reset security details and get credit cards. Butt was convicted of conspiracy to defraud at the Old Bailey in his absence after it is believed he fled to Pakistan.

Anyone with information can call the Dedicated Cheque and Plastic Crime Unit, run by Scotland Yard and the City of London Police, on 020 7709 6600.

Bayo Lawrence Anoworin, 41, from Lagos, Nigeria, is wanted by Lincolnshire Police over an alleged scam that stole more than £12m from NHS Trusts in the UK and Guernsey between January 2011 and July 2012.

He uses a string of fake identities including John Bay, Roland Martins, Wemio Adeyemi and Adeyemi Awonorin, and is accused of fraud offences and money laundering linked to a gang that targeted the trusts. Anoworin was arrested in Abbey Wood, south east London, in November 2012 and fled when he was released on bail. He has connections to Thamesmead, also south east London, and Chatham in Kent.

Naeem Ahmed, 44, from Smethwick, West Midlands, is accused of conning a string of mobile phone shops out of brand new handsets worth £40,000 by using stolen customer payment details. He was arrested in October 2014 after staff at a store in Portsmouth became suspicious, and was charged with 21 alleged fraud offences between June and October 2014 before he disappeared.

Ahmed got upgrades or was given new handsets at a number of stores in Portsmouth, Salisbury, Eastleigh, Andover, Bridgewater, Weston Super Mare, Taunton, Leeds, Dewsbury, Wakefield, Castleford, Newbury, Fareham, Southampton, Winchester, Bristol, Cardiff and Newport. He is believed to be in the West Midlands but police have not yet managed to track him down.