Serena Williams banished the demons created by defeat to Angelique Kerber in Melbourne, served brilliantly and learned from past travails

Serena Williams went into this match with demons to exorcise. Six months earlier, Kerber had ambushed the world No1 in the Australian Open final, preventing her from equalling Steffi Graf’s open-era record of 22 majors. Could the same opponent deny Williams that landmark again? In Melbourne, where she was gripped by anxiety, the burden of history clearly weighing heavy, her movement and anticipation were below par from the outset.

This time around Williams and her coach, Patrick Mouratoglou, had clearly done their homework. From the first exchanges, it was apparent that the defending champion was ready for Kerber’s short, angled groundstrokes and cross-court passing shots, and her footwork flowed with a fluency that eluded her in Australia. Happy feet make for a happy mind and, with Kerber struggling to unsettle her from the back of the court, Williams was largely free of the anxiety that plagued her when the two last met.

That enabled her to produce some of her best tennis when it mattered, not least on serve. Kerber was not overawed by the occasion and produced some exquisite shots, particularly off her free-flowing forehand side. But she was never allowed to play with the abandon she displayed in Melbourne, where she had to battle back from match point down in the opening round and thereafter went about her business with the unruffled air of a woman with nothing to lose. This time the serenity was all Serena’s.

Did Kerber toss it away?

Serena Williams is a remorseless front-runner; any opponent who allows her to establish an early lead and build confidence and momentum is asking for trouble. When Williams loses the first set, however, it is a very different story: she has won just two of the eight grand slam finals in which she conceded the opener. One of those defeats came against Kerber in Australia, where an early break – subsequently retrieved only to be quickly relinquished again – effectively set the tone for the entire match. Did that influence Kerber’s decision, having won the toss, to let the defending champion serve first? More likely she was simply trying to catch Williams cold, but it proved a bad call by the challenger. With Williams indomitable on serve, Kerber was never in front at any stage.

Up against arguably the best server in the history of women’s tennis, Kerber needed to take care of business on her own delivery while getting enough returns in play to at least give herself the occasional chance of a break. Doubtless aware that, while her serve could not win her a first Wimbledon title, it could certainly cost her the contest, the German was initially successful in the first department. Making inroads against the Serena serve proved more problematic, however. With the American sending down bombs, Kerber sensibly shifted back as her opponent threw the ball up, earning an extra millisecond to get a read on the ball. The tactic helped to put her in contention against serve come the business end of what was a tight first set, and Kerber gained a solid foothold in both the ninth and 11th games. 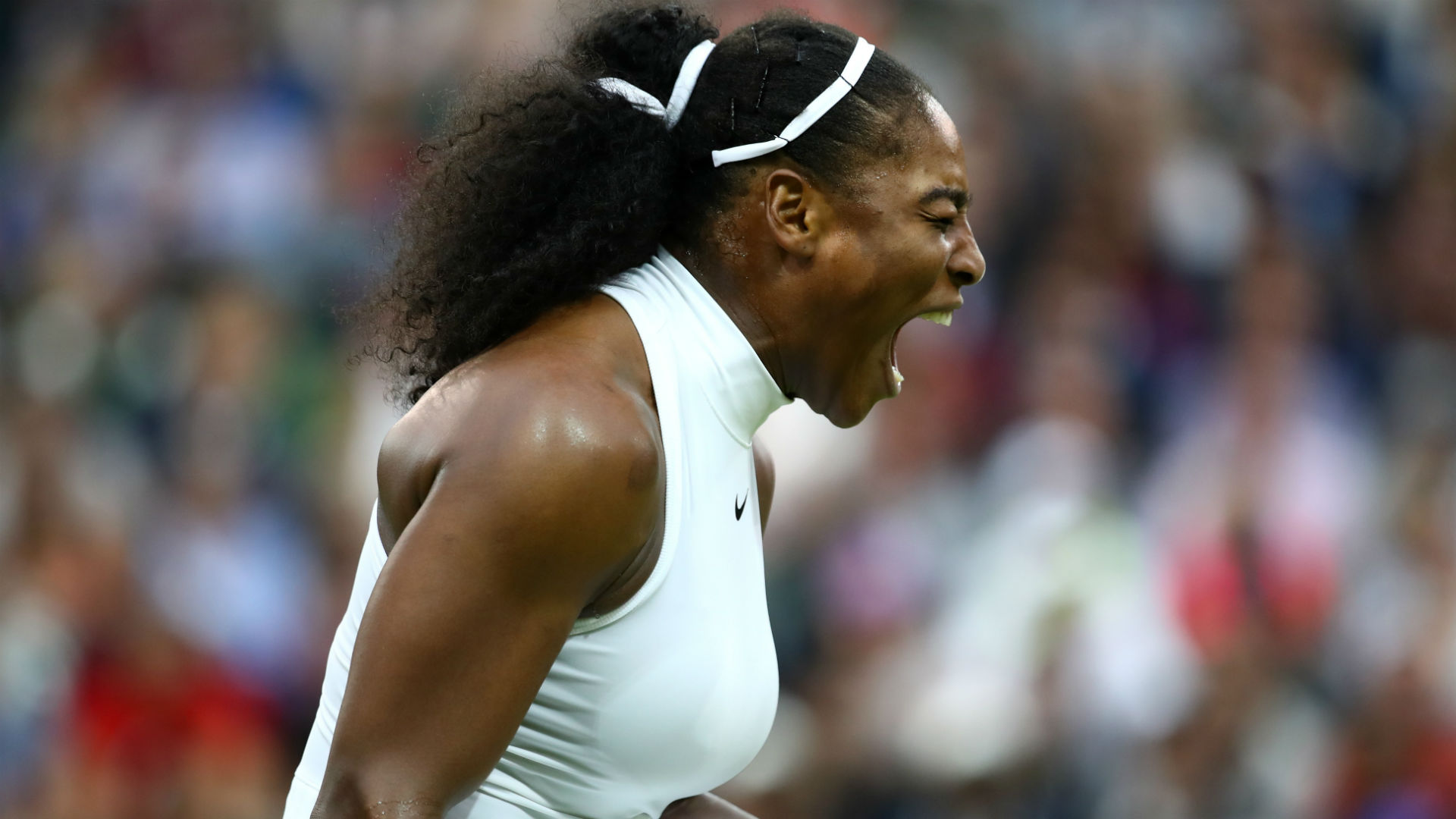 But Williams, who won a mind-boggling 88% of points behind her first serve, showed a champion’s knack for producing aces at key moments. One such delivery came at 4-4, deuce in the opening set, another – her eighth of 13 in total – at 5-5, 40-30. At 3-3 in the second set, when Williams responded to the only break point she would face all afternoon with two successive aces, Kerber’s forlorn expression said it all. She was decisively broken in the next game, her inability to make an impression against the Williams serve having placed disproportionate pressure on her own delivery.

Short rallies not sweet for Kerber

Kerber’s game is defined by her athleticism, consistency and speed around the court. In Melbourne, she used those attributes to draw Williams out of her comfort zone, forcing Serena to play extended rallies in which she repeatedly came out second best. Performing an encore on grass, where the points are shorter, was always likely to be a tall order. So it proved. With Williams dictating on serve and moving inside the baseline to narrow the angles from the back of the court, Kerber was rarely able to develop the rallies and create the short, sharp angles she needed to pull Serena away from the central positions where she is at her most dangerous.

While Kerber acquitted herself well in her second grand slam final, her tactics were of the tried and trusted variety: she ran, she retrieved, she tried to defuse Serena’s power. Could she have tried something different against an opponent who made 21 unforced errors? Perhaps nothing would have worked, given that Serena counterbalanced those mistakes with 39 unanswerable winners. Yet Williams clearly learned the lessons from her previous defeat to Kerber, and it will doubtless not have gone unnoticed by the German, or indeed the rest of the locker room, that her opponent – even at the age of 34 and with 22 majors under her belt – is improving.

Two years ago, when she was striving to draw level with Chris Evert and Martina Navratilova on 18 majors, Williams wobbled horribly, recording a dismal run of results by her standards. She fell to Ana Ivanovic in the last 16 at Melbourne Park, lost a second round match at Roland Garros to Garbiñe Muguruza, and went only one stage further at Wimbledon, where Alizé Cornet was her gifted but unlikely conqueror. Not until the US Open, where Serena carved her way through the field without conceding a set, was normal service resumed. In contrast, she has borne the weight of history more lightly this time around, her progress towards Graf’s modern-day landmark punctuated by appearances in a US Open semi-final as well as Australian and French Open finals. Even under the most suffocating pressure, she is becoming more consistent. The challenge now will be to surpass Margaret Court’s all-time record of 24 grand slam titles.