Suspected Niger Delta militants invaded the palace of Goriola Oseni, the oniba of Iba, in Iba local council development area of Lagos state on Saturday and abducted the monarch after shooting one of his wives and killing a guard.

According to the eldest wife of the king, the incident happened as Oseni was about having dinner around 8pm.

She said they were together in one of the rooms when they heard noise coming from the direction o f the sitting room.

Thinking it was the children who were playing, the woman, who simply identified herself as Alhaja, said she went to caution them only to see “strange faces”.

“I was in the room with the King. He wanted to eat but decided to take his bath first,” she said.

“Suddenly, we started hearing noise from the living room, and it was the children who were there watching television. So, he asked me if I could hear the children making noise, and as we came out to caution them, we were confronted with strange faces.”

The woman said the “strangers” inside the living room were four, adding that she later discovered that others had surrounded the compound.

She explained that the attackers, who were communicating in Pidgin English, tried to identify their target.

After being convinced that, that was the person they were after, they reportedly grabbed him in the attempt to whisk him away.

Alhaja said she resisted by holding the trousers of two of the kidnappers, and not even the shots they released into the air, would make her loosen her grip, until one of them hit her hard. 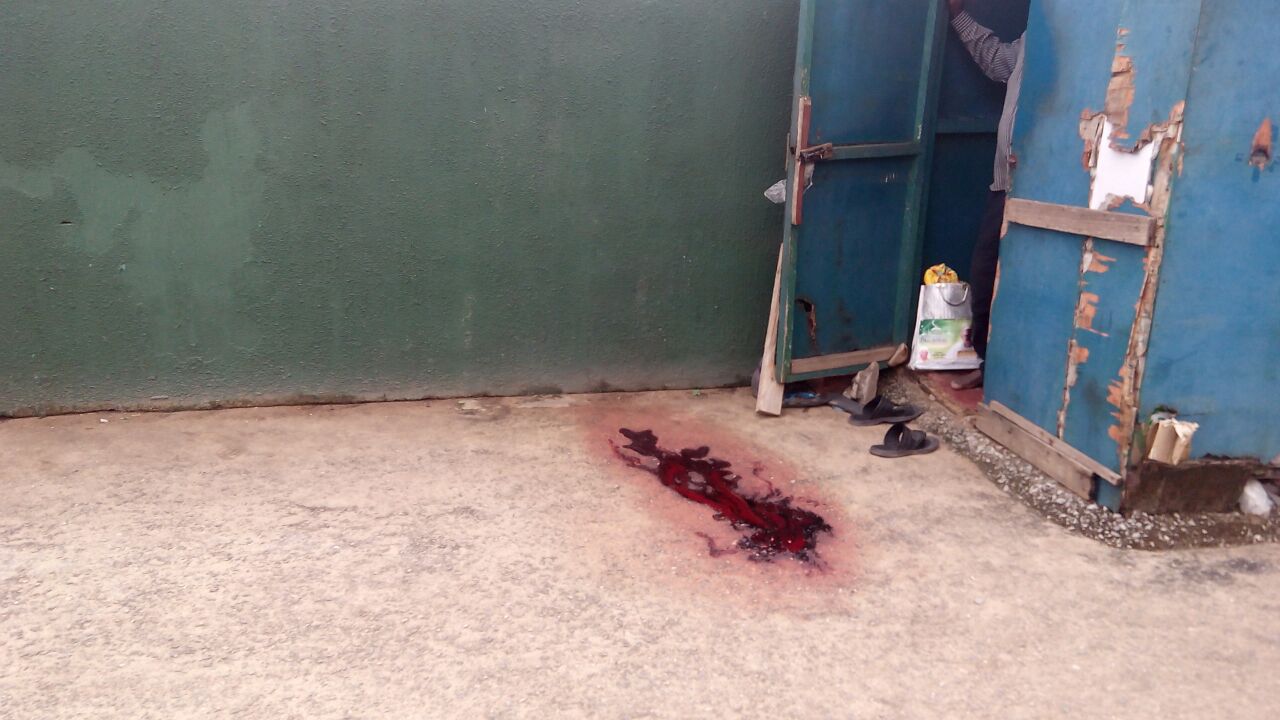 The spot where Okanlawon was killed

“The tallest among them hit me on the face, and barked: ‘U b witch?’. At that point, I let go of their trousers, and started pleading with them not to harm him. They forcefully dragged him away.”

The only things that the militants reportedly left with were four phones belonging to their victim.

Sunday Okanlawon, the security guard on duty, was said to have been shot dead during the operation. One of Oseni’s wives was also shot, but unlike Okanlawon, the woman is said to be recuperating in hospital.

People thronged the palace to sympathise with the family of the monarch.

Security personnel also mounted strategic places in the community, which had people in groups discussing in hushed tones.

Speaking to TheCable, a middle aged man, who refused to disclose his identity, said the incident left everyone in shock.

“This is strange, really strange. I am an indigene of this town. I have lived here all my life. I am still in shock over what happened last night,” he said.

“This is an abomination. To abduct a whole king from the palace? The only problem we usually have in Iba is cultism, and maybe sometimes robbery, and the king abhors such. He usually advises the youths of the community to shun violence… We have been hearing of the activities of militants in some surrounding communities, but we didn’t expect them to take this dimension. These people are calling for war.”

Commenting on the incident, Dolapo Badmos, police public relations officer (PPRO) in Lagos, said efforts were in place to secure the release of the monarch.

She said militants, who have been displaced in pipeline vandalism, have taken to kidnapping, but that security agencies will not allow them make life unbearable for the citizens.

Badmos said many suspects have been arrested, saying the Lagos command of the police is collaborating with its Ogun counterpart to check the activities of militants.

“This is a new trend being employed by the hoodlums who are originally pipeline vandals tagged: militants,” she told TheCable.

“It’s because their vandalism activities have been curtailed that they resorted to soft targets mode of kidnapping. The command has been arresting them and rescuing victims. The latest case will not be different.

“The command is liasing with our Ogun state counterpart to ensure we put an end to this menace.”

Lately, militants have been raiding south-west communities surrounded by water.

Many residents in Ikorodu have fled as a result of activities of the dissidents who operate unchecked.